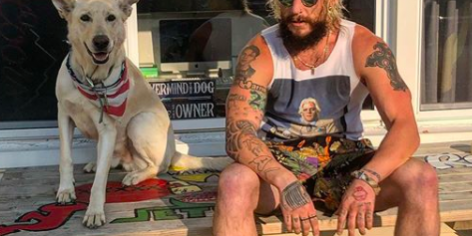 YNK podcast has been going strong for ten episodes now. And at this very moment, we are ranked 681 out of 500,000 Apple podcasts—the top 0.1%. Do you know what that means? It means ya neva know Steve, that’s what it means.

Warning: You might not be able to handle this week’s guest if you’re SAWFT.

Musician and wrestling legend nZo will join Mike on our 11th episode this week. A New Jersey native, nZo knew as a child he wanted to become a pro wrestler. It wasn’t until MTV’s Jersey Shore invaded his home state that nZo got the chance to show his talent to the wrestling world. How did he show his ability you might ask? Well, through a diss track of course.

What followed would turn out to be one damn unique journey a person could have by the age of thirty, and you’ll find out this and more about nZo throughout the episode. But the one quality you should know is he doesn’t care what other people think. He continually challenges and defies the status quo.

This week will be a conversation of two people who are not afraid to speak their mind. Mike and nZo will visit the challenges faced in their respective industries, how to not take business dealings personal, and how to deal with adversity when it’s thrown in your face.

One more point to note, start researching the power of manifestation. You’ll hear how Mike and nZo have used it to their advantage in life. So listen actively.

“Episode 11: nZo” will release on Wednesday, August 28h. You can listen to us on Apple, Spotify, Youtube, and ynkpodcast.com. Click on the icons below to connect to our social outlets and subscribe. As always, thank you to all our listeners out there. Please feel free to comment and shout us out.

Want to check out some of nZo’s music before Wednesday? Hear his heart moving track “Grace” below.