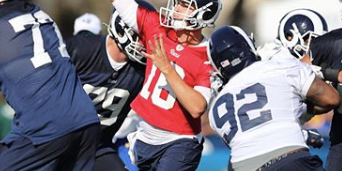 It’s only been a couple of weeks since we had JG16 on the pod, but we’ve got more than enough reasons to give him our first clip highlight. Here’s what happened since he left:

Remember when Jared threw an interception on the first drive of last year’s Super Bowl? He tells explicitly to Mike in this past episode his philosophy, called PACE, was what helped him keep his head in the game after that play. When talking to Mike about perseverance overall, Jared had this to say:

It’s called PACE, which means performance after a critical error. And it’s how you’re truly judged. How you are judged after your biggest failure. That is what I believe to be the biggest piece of the quarterback position and in life.

This clip can be used as a great motivational piece to help those battling through adversity, and for those who wish to see how Jared looks at the world around him. Keep your eyes peeled Steves, more clips to come.