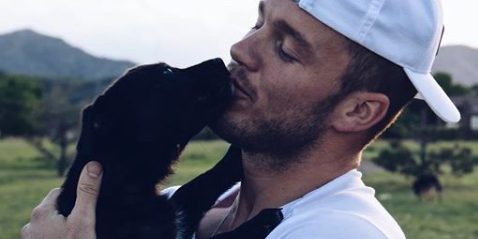 A couple of weeks ago, Camille Kostek stopped by Stevenson Ranch, solidifying herself as the most beautiful female guest to date on YNK. Now, we have our most beautiful male guest joining us this week. Colton Underwood.

Born in Indianapolis, Indiana, Colton grew up in a house of athletes. He played many sports throughout his youth; however, football became his primary passion growing up. When Colton was ready to choose where to go to school, he landed on Illinois State University, the same school where his dad played football at, and where his mom played volleyball.

Colton went on to post back to back All American years as a defensive end his junior and senior seasons. He would cut his teeth on the practice squad of the San Diego Chargers after signing as a preferred free agent in 2014. Usually, Colton found himself primarily on defense and special teams, except when he was moved the Oakland Raiders in 2016, former teammate Phillip Rivers suggested to coaches to try Colton at tight-end. The next season, Colton found out he was switched to the offense. On the first day of pads, he suffered a shoulder injury that led him to decide to hang up the cleats due to the wear and tear his body had taken in such a short amount of time.

After the NFL, Colton took some time off to try and figure out what to do next with his future. He went and dated Olympic Gymnast gold medalist, Ally Raisman for a year, inadvertently gaining more experience being in the face of a camera. When the two broke up, Colton found himself at a low point. It wasn’t until stumbling upon a Bachelorette open casting at a mall in Denver that Colton soon found his life start to change for the better. The directors loved him, and three months after his interview, he was called to begin filming.

Now here is where the rest of Colton’s history is more well known. We know he spent a season on The Bachelorette, then Bachelor In Paradise, and finally on The Bachelor as the big guy. But outside of all the spotlight and the noise, Colton has not had much time to let people know his full story. I mention this because, for the past two years, his interviews have had a Bachelor lens on them. And that is totally ok.

But in this weeks episode, you will get to see an entirely different side of Colton. You will find he loves the entertainment game. You will find out how tv helped Colton discover himself. Above all, you will see how to handle life when it throws a curveball at you.

And maybe, just maybe, a rose ceremony will commence. So comb your hair and get dressed for this episode. This is Colton Underwood we are talking about dammit.

“Episode 15: Colton” will release on Wednesday, September 15th. You can listen to us on Apple, Spotify, Youtube, and ynkpodcast.com. Click on the icons below to connect to our social outlets and subscribe. As always, thank you to all our listeners out there. Please feel free to comment to let us know how we are doing.

Want to check out how Colton uses his platform to help others? Tap below to learn about the Colton Underwood Legacy Foundation, a non-profit organization dedicated to “empower people with cystic fibrosis to live fully, dream big and support each other.” The foundation uses donations to provide people of all ages with CF the equipment and resources they need.