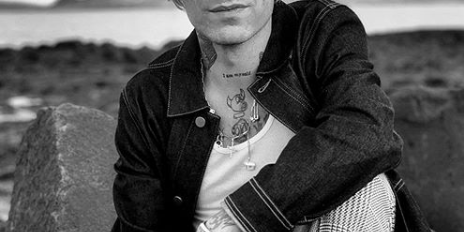 Prepare for the most self-reflective episode yet Steves.

Modsun is here, and he and Mike have some catching up to do. From late-night party convos at the Stevenson Ranch, to raging with each other back in 2013, the two have had a friendship that has stood the test of time. Mike and Modsun share the fact they were two new artists on the come up at the same time. Both had a sound rap had not yet experienced, and both were on the wave that was revolutionizing how musicians interacted with record labels.

Born in Bloomington, Minnesota, Modsun grew up listening to an eclectic mix of music that can be heard in his work today. Bob Dylan, Jim Morrison, and Prince to name a few. One can see the influence of those artists on Modsun by his natural ability to write lyrics with a poetic touch—a rare gift many artists have trouble tapping into these days.

But Modsun was not always writing music. He was a professional drummer for the hardcore band Four Letter Lie from 2004-2009. It was not until the age of 19, a time when the noise of touring was louder than ever, that Modsun felt the urge to start putting his thoughts down on paper. He slowly began the shift from drummer to rapper, releasing several mixtapes and EPs along the way. In 2015, he debuted his first album Look Up through Rostrum Records. It would reach #1 on the Billboard Top Heatseekers chart. Since then, has gone on to work with the likes of Schoolboy Q, Nipsey Hussle, G-Eazy, and Machine Gun Kelley, each time leaving his unique hippy rap sound.

Self-reflection and growing pains. That is going to be a significant theme throughout the two’s conversation. So, take the time to sit down and listen carefully. Modsun has a lot of wisdom to share that many people do not have at his age.

“Episode 16: Modsun” will release on Wednesday, October 1st. You can listen to us on Apple, Spotify, Youtube, and ynkpodcast.com. Click on the icons below to connect to our social outlets and subscribe. As always, thank you to all our listeners out there. Please feel free to comment and let us know how we are doing.

Check out Modsun’s most recent music video “I Remember Way Too Much” below. It is one of the first songs released since he chose to become fully sober. Congrats Mod, we are proud of you.